Dear Adam Sessler – It’s because we viewers have to BUY the games… and I don’t have all day. 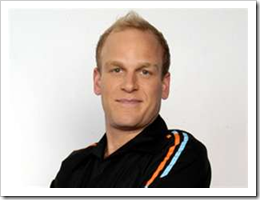 I was watching a podcast rant by Adam Sessler from G4TV called “I Hate Numbers” – whom I have a tremendous amount of respect for by the way for his energy, passion, intellect, and capacity for introspective thought – and he was raving, once again, about how he hates summarizing games into a rating from 1-5.

His rant revolves around what he considers the near impossibility of trying to be objective about something he considers art, the difficulty of comparing one genre to another, and the need to declare one game ‘better’ than the other in some sort of competition.

But he never mention the intent of the reader.  During his diatribe about the art of gaming, the inanity of summarizing reviews into a number, the difficulties of violating his principals, how a “little part of him dies”, etc. etc. he never once mentioned that the whole reason people read G4TV’s reviews is to answer the question…

IS THERE A POSSIBILITY THAT I SHOULD I SPEND MY HARD-EARNED, LIMITED QUANTITY, CASH ON THIS GAME?
Let’s say I can buy only one game this month.  There’s 8 amazing titles out there that I’m interested in.  Should this game be in the running?

Before these questions are answered, I couldn’t care LESS about art, genres, and principles.  It’s my dollar and I’m depending on industry experts to tell me if I’m dropping cash on something that the rest of the world – in general – thinks is crap.  Metafilter, G4, IGN, and other sites are just tools to help me understand that quickly & at a glance because I’m a gamer – not a reviewer – and all I want to spend time on is knowing “MAYBE” or “NO”.  And even after this I need to then ask…

WOULD THIS GAME ALIGN WITH MY TASTES?
After it passes the “is it broken” test, then it’s possibly about art & subjective opinion.  But even then, there are factors that allow a viewer to make an

I have more to say about this but the bottom line is this:

As a viewer, I have a very limited budget, and a very limited amount of time.  I respect Adam Sessler’s opinion & think that it likely reflects much of my own tastes – otherwise, I wouldn’t bother watching X-Play or G4 or Sessler’s Soapbox or whatever the hell he’s on.

So do I want a numeric score for each game reviewed?  HELL YEAH.  Is it meaningful?  HELL YEAH.  Does it make Adam cringe when he has to summarize games in this way?  MAYBE.  But that’s the job & that’s the way it’s done & that’s what I need as a viewer.

So quit your bitching & suck it up, review boy.  Now get back to work.

NEWS: An old article about “Bringing Down the House”

I saved this article from back in 2008 and I only recently found the original article.

March 23, 2008 — YOU can leave the disguises, the tunneling and the elaborate capers to George Clooney and his “Ocean’s” gang. Jeff Ma and his crew robbed Vegas blind by walking right through the front door.

From the late 1990s until about 2002, Ma’s team racked up winnings approaching $5 million by using that bane of SAT takers everywhere: math. The team employed an elaborate system based on card counting and probability to turn the blackjack odds slightly in its favor and beat the casino at its own game. In a place where most people walk out with empty pockets and scrounging for next month’s rent, Ma was strolling out with a suitcase full of cash.

Somewhere, Joe Pesci is itching to cram this dude’s head into a vice.

Ma’s story and that of the so-called MIT blackjack team was chronicled in the 2003 book “Bringing Down the House” by Ben Mezrich. That best seller has now been (very loosely) adapted into “21,” starring Kevin Spacey, Jim Sturgess and Kate Bosworth.

In the film, which opens Friday, Sturgess plays Ben Campbell, an MIT student who joins an underground gambling team to pay for medical school.

In reality, Ma (who did go to MIT) got into card counting because he was bored.

“My roommates were going away to play blackjack every weekend,” he says. “I asked them where they were going and when we’d ever hang out again. And they said, ‘We can. You can come with us to Vegas if you learn this system.’ It sounded kind of sketchy, but they convinced me to do it. My primary motivation was to hang out with them in Vegas.”

There’s an decent list of basic rules in the article that I thought might be useful for the beginner.

HOW TO WIN AT BLACKJACK

Former members of the MIT team offer these tips:

The world’s only feasible competitor to Google

As seen at Mandalay Bay.  The casino knows that Microsoft’s search & advertising framework is solid.

Something from last year’s CES 2011

I stay at Mandalay Bay these days.  This is a photo of something I saw last year while at CES 2011.  (Yes, only an entire year late to post.  Sigh.)

Of course I told the cashiers about the failed system.  Based on the fact that it couldn’t make a temp file, I would hypothesize that the drive was likely full.  Maybe something was misconfigured in the logging/event system or the database has somehow grown too large.

But it led me to looking into the companies that build ATMs on Windows Embedded in general.  I used to work with the financial services industry and had 4 banks that all used Windows Embedded based ATMs.  Yes, they were on an Active Directory domain, and yes, they all ran Windows ATM software.  But I never knew the breadth of ATM solutions out there since it was never something I needed to research.

Then I found this.  Look at this list.  Wow:

Names like Wincor Nixdorf and NEC stick out.  I also know that there are some big names in the ATM industry that are NOT listed on the above link that use Windows Embedded.  I’m kinda curious as to why there’s no entry for them.  Probably because they don’t need the publicity – the companies I’m thinking of are huge and probably don’t need it.

Fallout: New Vegas… what a disaster.

I’ve been a fan of Fallout for a long time and was really excited about Fallout: New Vegas – outsourced by Bethesda Softworks to Obsidian Software, based on the original Fallout 3 game engine.

I love the games environment, the open play, the story… everything.  Fallout 3 lasted me nearly 9 months of play with all the downloadable content packs.  And for that, Bethesda will always have a soft spot in my heart.  The only game I can ever recall playing that long was Starflight from Electronic Arts back in 1989.

This game has been plagued by bugs and crashes since day one.  But I played through them.  I found workarounds.  I waited for updates.  Probably 80 hours of game play – and I wasn’t even close to finishing the main story line.   Then my world was turned upside down by a sudden change in my job and I was pretty much forced to put down the controller for more than 4-5 months, may be longer – I don’t remember.

So it’s Christmas 2011 and I finally have some free time.  Time to start playing again.  Apparently they’ve patched this game… like FIVE TIMES since I left it.  So XBox 360 auto-downloaded the patch and away we go.

THE PROBLEM
Holy jeezus.  My game saves won’t load.  It just sits there for 10 min doing nothing – no matter how many times I try.

Alright.  Don’t panic.  Search the Internet.  Go to the support forums.  Figure out what the solution is…  WHOOPS!  The Bethesda forums are ablaze with angry players & apparently these patches have resulted in the same experience that I have.  Game saves that won’t load, people losing their progress.  Frustrated people threatening Bethesda.  Some blaming it on the DLC.  Others on the patches.

THE SOLUTION.  SORT OF.
Finally, I start to delete the DLC and the game patch #5 from my Xbox 360.  SYSTEM SETTINGS – STORAGE – GAMES – “Delete Game Patch #5 & anything else”.  I run the game again, decline the patch, and lo-and-behold, my game saves now load in 3 seconds.

So what of all the patches they made over the past 6 months.  5 patches must be pretty significant.  Surely they’re going to fix this, right?  This can’t be the end of the line.

Then I read on the forums:

“Sorry guys, this is it. I’m the last one on the project, and I’ll be turning out the lights after this week.  It’s been a good run, but everyone is moving on to new projects. (9/26/11)

I mean, I get that it’s just a game, and I get games have only a certain lifespan… but after a year, they still don’t have the game in a functional state – so they just decide to pack it in and call it a day.

I can’t say that I’ll ever purchase another Obsidian Software product.  Unless I hear otherwise, to me this is may be a Bethesda problem… but it’s mainly an Obsidian problem.

INFO: My rules of Vegas

With CES 2012 just around the bend, I figured it might be good to write down my rules of Vegas.

Rule #1: Never let the taxi longhaul you through the tunnel.

Rule #2: Always use the $20 sandwich at reception.

Rule #3a: Bring the vitamins, the homeopathic junk, & the antibiotics.
Rule #3b: Know where the Walgreens is on the strip.

Rule #7: Don’t complain about the line if you had to get in it in the first place.

Rule #13: Never pass up the entertainment.
They don’t burn your bankroll & they keep your mind fresh.

Rule #16: Always make sure you have a reliable cabbie in your contacts.

Rule #18: Taking a bathroom break is always better than playing a bad shoe.

Rule #19: Dressing appropriately is almost as important as the tip.

Rule #22: Always know what conventions are going on during your visit. (http://tinyurl.com/lvconventions)

Wow.  There’s a lot of drama right now on all the UCLA sports feeds – especially the subscription forums that people pay to be on – due to: