Given that you guys like the Windows Phone style so much, would you care to let us know when there’ll be a reasonably useful Windows Phone client that exceeds the capability of the Yelp web page?  Location services is nice but c’mon guys, really?   No login.  No mobile reviews.  No checking in.  No uploading of photos.  No account history.  No “FUC” ratings.  No threaded discussions.  No messaging.  FourSquare, Facebook, & Urban Spoon apps all beat the crap out of your WP app and they aren’t even that great!

There’s 1169 reviews right now, and the average review is a 2.5 stars out of 5.  That means that more than ~550 people rated the app EQUAL OR LESS THAN 2 1/2 STARS.  I’ve never seen a major brand have such a low score for their app on Windows Phone.

Here’s a short listing of apps that have a better score than Yelp for Windows Phone:

And while I’m dreaming… a Windows 8 app would be nice too for us Windows tablet users, yes? 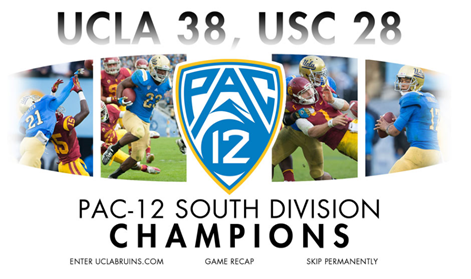 INSTRUCTIONS:
To take advantage of the discount, go down to the Student Store today with your game day ticket… or shop online using the coupon code “SCOREBIG” when you go to http://shop.uclastore.com/.

For posterity.  And for Jim Mora.

We endured  the rain & constant playing of “Tusk” & “Tribute to Troy”.

Sweet revenge on a team that did NOT expect us to show up. 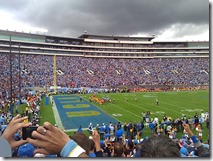 $5 program drenched with rain water from the downpour.  And for once, I saved my souvenir cup.  This was *almost* the most fun I’ve ever had soaking wet.

Any Big Bang Theory geeks out there?

Having actually been in a live studio audience taping of “The Big Bang Theory”, I can tell you that THIS DOESN’T SURPRISE ME IN THE LEAST.  That show is fun fun fun to watch in any capacity.

I only wish I was at this taping.

Someone needs to recognize & respect…  NOW.  Y’all did it for “The Family Guy”.  You can do it for Firefly too.  I’m sorry but I have to say the quote one more time:

“We have done the impossible, and that makes us mighty.”

Time has proven to be the best friend of Firefly, which wasn’t exactly considered a hit show when it first aired ten years ago, but it’s obviously managed to attract a very strong cult following today.

So strong in fact that now Firefly is finally a big ratings winner a decade after the show went dark.

There’s a LOT more article to read so go here:

Refrigerator Spelling from the kid of a Geek Father

You know you receive way too many boxes from online purchase deliveries when your 3-year-old does this out-of-the-blue.

I walked up to the refrigerator the other day & was like, “Wait, WTF? HONNNEEEEY? Did you teach him this? No? Okay, come check this out: Look at what he spelled out on the fridge.”

Yeah, I can vouch that Surface can both ‘flip in the air’ and take a hit as well.

And one time… at band camp…

The band geek in me just swooned at this set.  Good job, Bows.

VIDEO: The Guide to Trading Candy

I love this video so much, I’m posting it here for posterity.

The Guide to Trading Candy

My wife didn’t understand me when I made a remark about distinguishing between ‘Tier 1’ and ‘Tier 2’ candy.

I suspect she will make an excellent trading partner next year.