There’s now a site that will produce graphics in the same style as Barack Obama’s “PROGRESS” poster created by Shepard Fairey.

Needless to say, when you launch a site that allows people to think of their own ideas, and make those ideas a reality, some folks using it have come up with some really creative images.

For a listing of all the “top rated” creations, visit:

Here’s some of my favorites.  It’s stuff like this on the Internet that GIVES ME HOPE:

VEGAS ‘09: My Itinerary in Las Vegas

NEWS: Inquirer weighs in on Windows 7

I stopped reading the Inquirer or the Register a lonnnng time ago, so the only time I hear about it is if a customer tells me about something about the garbage they throw up on their site.

THE INQUIRER ON “WINDOWS 7”
So naturally, they’ve weighed in on Windows 7 with the appropriate level of factual accuracy and unbiased opinion that they’re known for:

“…Windows 7 is really just a respin of Vista with some fixes for strategic blunders and a few cosmetic refinements, as the Vole itself effectively admits. It’s just a Service Pack for Vista, really, and if Microsoft was a responsible company it would simply call it that…”

“I haven’t actually seen it though, and probably won’t even try it out.”

THE ART OF LINKBAITING:
This article is what is known in the advertising industry as “linkbaiting”:  The practice of writing something so inflammatory that it immediately incites angry comments and links to said article to generate page views of their advertising.

So why am I “biting” on this piece of linkbait?

Because I think it’s a supreme example of how poor the reporting is on this web site.  Their agenda has always been to drive page views and advertising hits with sensationalistic reporting.  And knowing that their audience are geeks with technical degrees that don’t know anything about media & advertising, they manage to get well-meaning IT people to react, respond, and help drive revenue for them.

FACT CHECKING?  THAT’S FOR SISSIES.
The bottom line is that the Inquirer & the Register do not fact check.  They have no accountability to what they publish and they have no shame about how it is that they get people to read their content, even at the expense of others:

YOU CAN’T TAKE ANYTHING THE REGISTER OR THE INQUIRER SAYS AS FACT.  EVER.

This is not a news organization – it’s a tabloid rag of the same quality as the Weekly World News, the Star, or the National Enquirer.

Rao’s @ Caesar’s Palace gets big points by me. 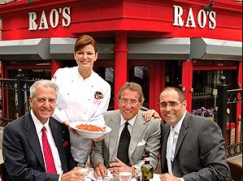 Rao’s has won a fan today.

I wasn’t feeling hungry earlier today despite the fact that I had a reservation at Rao’s – the Italian restaurant at Caesar’s Palace.  Rao’s is purported to have one of the best meatballs in all of Las Vegas so of course I had to try it.

The problem is, you really can’t rate food if you’re completely full.  So I cancelled the reservation and headed off to my evening show. (Penn & Teller)  After the show, I headed straight to Caesars intending on eating dinner by racing over to Rao’s.

I stopped, and she gestured to come in, and so I did.  She said, “ONE dish, right?”  I said, “Yeah.  Just the meatballs.  That’s it.”  She said, “Hold on – I’m going to ask the kitchen if they’ll prepare just that dish.”  She was gone for awhile but when she came back she said, “They’re going to take care of you.  One dish of meatballs.”  She turned to the bartender, where I was sitting by then, and said, “The kitchen said it’s okay – one dish of meatballs.”  The Bartender said, “Cool.”

Needless to say, I tipped her $10 as she left.  And sure enough, when the meatballs arrived, they were steaming hot. The bartender came and put FRESH parmesan cheese all over it that smelled heavenly.

I’m going to summarize here because I have a full review of Rao’s on Yelp but suffice it to say, these folks get a 5-star for me as a combination of service and food.  The food is the most important part but the service is what gets them to the “I-will-always-come-visit-on-every-trip” level.

I went to the Bellagio to go eat at Yellowtail, a sushi restaurant created by the Light Group that I went to during it’s opening weekend back half a year ago.

On my way out, a bit drunk and daring, I said to myself, “Hey – I can play here.  I’ve got balls o’ steel.  If these Bellagio dorks can play on the floor tables, so can I.”

“After all, it’s not like I’m playing high limit or anything.”

THE PIT OF DESPAIR
So I start looking for a good game.  The Bellagio is loaded with crappy games with Continuous Shuffling Machines or $25 games with 6 deck shoes.

I finally found a small pit with double deck 3-2 Blackjack.  Excellent.  Better yet, there’s only one guy playing.  Even better.  Wow – and they stand on soft-17.  Nice!

I looked at his chip stack and it had gone for $30,000ish to $2000 in a matter of minutes.  Finally his last $2000 disappeared on a lost double down against 4 and he slammed his fist on the table.  The gentleman, who wasn’t dressed particularly fancily, got up and left… only to return in 30 seconds with $10k more in yellow chips  I watched so more, and he promptly lost that as well.

Disgusted, he got up and stumbled away from the casino.  I lost sight of him at this point.

AND THAT WASN’T THE BIG SWINGING D-CK
My jaw was on the floor – just like everyone else watching.  I looked over at another table where an odd but stylishly dressed looking guy sat with some beautiful arm candy next to him.  He was on another monetary plane, using BROWN chips – $5000 each.  I watched him double down and lose what looked like a 4-chip $20,000 bet.  In a single hand, $40,000 was gone.

What I realized at that point was that, these were his last chips from a stack that was once quite large.  Probably $150k.  He got up, left his girl, and walked across the floor.  Everyone near me was watching him as he said loudly, “BRIAN… I’M GOING SDFASDGSDG”  (I couldn’t hear the final word)  All of a sudden the pit boss grabbed a clipboard and a pen, and whispered something to another manager, then started running toward the man’s direction, disappearing into the crowd.

AND WHAT ABOUT ME?
I stood there sweating all over.  My antiperspirant gave out several minutes ago.  I was rooting for these guys to win HARD – even going as far as to mouth the right play as I watched the cards go down from shuffle to shuffle, and they… just… couldn’t… win!  Nothing was going their way… and these were the whales!  The guys that gamble at the $100K level.  On a good day, I’m lucky if I’m a black chip player!

I gotta say – I was shaken.  So much for confidence:  My play is NOTHING to the Bellagio, and they’re not going to offer me a decent game.  I’d be relegated to a $25 6 deck shoes where a bad run across multiple shoes could easily ruin me.

So, I promptly walked out of the casino, past the hookers in the lobby (who always seem to congregate there on the cushioned chairs there), and straight to the taxis.

I’m still “up” and in the black for this trip.  Knock on wood.

A quote someone forwarded to me from a friend

Wow, is this appropriate for our times.

"You cannot legislate the poor into freedom by legislating the wealthy out of freedom.  What one person receives without working for, another person must work for without receiving. The government cannot give to anybody anything that the government does not first take from somebody else.  When half of the people get the idea that they do not have to work because the other half is going to take care of them, and when the other half gets the idea that it does no good to work because somebody else is going to get what they work for, that my dear friend, is about the end of any nation.  You cannot multiply wealth by dividing it."

“Don’t yell at your hard drives”

As a geek, this is pretty funny and really interesting.  Funny how no one’s made notice of the precision that drives at today.  Leave it to those wacky Sun Engineers!

I particularly love his comment in the link above about “staying clear of the JBOD” when he’s watching cricket on their Internet video feed in the lab.

Why would Criss Angel have this ad?

A quick question:
Take a look at this ad for “Criss Angel BELIEVE” by Cirque du Soleil.

…yes, those are roaches.

And you’re supposed to be somehow compelled to buy tickets for the show on the basis of this ad.  Or at least fascinated enough to ‘clickthrough’ to the show web site.

As opposed to being repulsed.  Or revolted.

Maybe it’s just me, but I don’t know too many people that are that enamored by roaches.  Puppies, yes.  Babies, yes.  Scantily clad ladies, yes.

Not even if you’re Goth.  Especially not when the price tag for basic tickets is in the $100/seat range.

I suppose the “roach” theme may have something to do with the show, but I wouldn’t personally know.  I have no opinion about the show being that I haven’t personally seen it however after reading the reviews on Yelp (http://www.yelp.com/biz/criss-angel-believe-las-vegas-2) describing the spectacle sadly as a disappointing show, I can’t bring myself to throw down money for it – no matter how much I love magic.

I can only surmise that if the show is being universally panned, it’s possible that the same creatives that put together this production, also did their marketing.

Because I just can’t imagine this being considered good advertising.