Google Blackmail: “Either you sign up for Google Plus or we release all the private information we know about you.”

As a relatively recent father… I adore this ad.

Nothing better or funnier than the truth.  The rapid fire, no holds barred truth.

Everyone agrees that there’s a shortage of next-generation console units to buy, right?  Demand is outpacing supply, right?  There’s a limited number of consoles for each platform whether it’s Xbox One or Playstation 4.  It’s a good bet that the numbers are roughly the same given that both companies launched their consoles around roughly the same time, (PS4 had a 1 week longer) have the same manufacturing capabilities, and are shipping units as fast as they can make them.

JUMPING TO CONCLUSIONS AND LOOKING SILLY
So along comes a media flack that announces:

“Well, Microsoft had to ship Xbox One in 9 countries to make their 1st million units sold, whereas Sony shipped PS4 in only the US to sell their 1st million.  Clearly, Sony’s doing got better momentum & I expect them to grow faster once they are able to generate more supply.”

Excuse me, but what difference does it make what country or countries the sales come from?

Again, there were a limited, finite number of consoles available worldwide & both Microsoft & Sony sold out of the units they had available after week one.  The only difference was where each company shipped the units they had manufactured.  Sure Microsoft could have focused all their sales in the US by making the Xbox One only available in the US and ignoring Europe, but instead it made units available in 9 countries.  This was done likely with the knowledge that Xbox fans in the US would still purchase consoles later, if they couldn’t get one at launch.

A few thoughts on this:

ELIMINATING THE MEMORY AVAILABILITY BOTTLENECK
One of the things that the Xbox One team did was they chose to use current generation RAM/memory a.k.a. DDR3, instead of the rarer, more difficult to manufacture GDDR5.  This eliminated a significant potential manufacturing bottleneck for Xbox One:  Instead of being constrained to the supply of GDDR5 memory available in the world, (again, GDDR5 is much more difficult to manufacture in volume while providing arguable performance benefit for games) Xbox One would be able to build more consoles and get them to market quicker (by using more readily available DDR3) than consoles that would otherwise require DDR5 like PlayStation 4.

HISTORY REPEATING ITSELF
Note that this was a lesson learned by Microsoft from the Nintendo Wii.  To this day people often forget that the winner of the last generation console wars at least on console sales, was the Nintendo Wii, selling more consoles than Sony & Microsoft combined due it’s ability to manufacture systems simply by using last gen, readily available components & parts.

Microsoft didn’t go nearly the same lengths that Nintendo did on the Wii with the Xbox One.  While it does have a state-of-the-art 8 core CPU & next gen GPU along with 8GB of RAM, 500GB of storage, Ethernet port, & Blu-ray Drive, it’s usage of DDR3 provides a manufacturing capacity edge that allows Microsoft to manufacture more consoles without being constrained by worldwide memory yields of the newer memory.

The bottom line of all of this however is that we really won’t know solidly which console comes out ahead until at least a few quarters have passed.  By then we’ll have seen whether Microsoft’s strategy of:

…will have paid off.

What Vegas cabs charge the most per trip?

With CES coming up, it seemed like a good time to write up my annual post about taxicab longhauling.

I love Las Vegas but something that always bugs me is getting longhauled (being taken extra long routes just to increase cab fare) by unscrupulous cabbies to increase their total fares & meet the company’s expected quotas.  It’s something that bothers me because I would rather let a cabbie – my service provider – keep the change from a $20 bill then get longhauled and have the taxi company take all my money… who frankly, I couldn’t care less about.  In fact, longhauling reached epidemic proportions in 2013, so much so that people started writing about it:

FOLLOW THE MONEY!
So the question I wondered was:

Well, it turns out that the Nevada Taxicab Authority keeps public records of taxicab company revenues in multiple categories including:

And this is where it gets interesting and maybe even obvious.  But I’ll let you draw your own conclusions.

Here’s a snapshot of each cab company’s “Revenues per Trip” for October 2013, i.e. “Who makes the most money per trip on average?”  In particular, look at the top 3:  (Note: Before you make the assumption about “Deluxe” & “A-Cab”, keep in mind that if you are a tourist on the Vegas strip or arriving at McCarran Intl, you will never see these taxis because they don’t service tourist areas like the Las Vegas strip.  They only service Vegas locals & as a result, their fares tend drive farther & cost more.)

For a more visual comparison, here’s a chart:
(I’ve highlighted A-Cab & Deluxe’s averages since they are for all intents & purposes, not relevant to Vegas tourists visiting the strip) 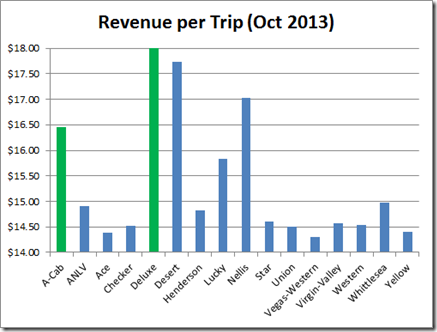 So now take a look at the top 3 companies on this snapshot of “Revenues per Shift”, i.e. “Who’s cabbies make the most money on fares?”:

Again, for a visual comparison: 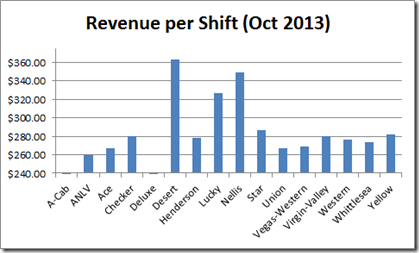 Now take a look at the top 3 companies on this snapshot of the “Revenues per Medallion”, i.e. “Who’s cabs are driven the hardest to make the most money?”:

Noticing a pattern?  Uncanny isn’t it?

If so, the next time you’re about to enter a cab in Vegas… y’might want to look at the name on the side of the cab and ask yourself, “Am I about to be taken for a ride?”