This came from one of those meme sites.  I hate clickthrough web sites that make you page through every list item so I absorbed this whole list into a single page.

If you’ve ever read “Desperate Networks” or “The War for Late Night”, both by Bill Carter, you’ll want to take a look at this article by New York Magazine.

It’s a fascinating look at what’s happened at NBC News and goes into the tumult that has occurred over the past year involving Brian Williams, Ann Curry, Matt Lauer, and other notables.

Basically, it’s a cautionary tale about what happens when you let the inmates run the asylum.  This is really fascinating stuff.

Do you have a big collection of old standard definition DVDs sitting in boxes collecting dust?

I do.  In fact, I’ve given away more than 250 DVDs just because they took up too much storage space.

Then one day, I discovered VUDU.com and everything changed.  This revolutionary service is a complete “game changer”:  I hate the term “game changer”, but in this case the shoe fits.

But it’s different… as in, BETTER.  One of the major differences is it’s “In-Home Disc to Digital” service.

You put the physical DVD movie into your computer’s DVD drive & the D2D service verifies that the disc is an original copy.  For $2, you can get rights to stream the same movie on-demand from VUDU.

UPGRADING TO HD QUALITY
But it’s better than just that.  Remember that your standard definition DVD will get you a SD quality stream of the movie.  For $5, you can get the rights to stream the HD stream.  And if you convert 10 DVDs or more in a single batch, the upgrade-to-HD fee is dropped to $2.50/disc.

And it’s even better than that.  Because if you upgrade to HD, you’ll also get free access to the HDX stream, which is 2x the resolution of a standard HD video stream.

NO PROPRIETARY “LOCK IN”
Never fear – you’ll never be locked in to VUDU.  When you obtain the rights to the online stream of a movie on VUDU, those rights go into an independent catalog called “Ultraviolet” (located at UVVU.COM) which is funded by a consortium of movie publishers including Paramount, Warner Bros, 21st Century Fox, NBC Universal, Sony Pictures, Dreamworks, Lionsgate, MGM, The Weinstein Company, Relativity… basically every major & most minor Motion Picture Studios… except Walt Disney Company. (More on that later)

If you decide to try a different streaming service, you have your choice of any number of other services that support Ultraviolet, including CinemaNow, Flixster, blinkbox, Cineplex Entertainment, & JB Hi-fi.  This means your entire Ultraviolet movie catalog that you amassed on VUDU is also available on, say Flixster.

That’s right.  You can switch services anytime you like.  Or use multiple services at the same time.  This is hugely important because unlike Apple’s iTunes, if you don’t like one service’s web site or support, you can just up and LEAVE without fear of losing your content.

BTW: ULTRAVIOLET SERVICES DO IN FACT DIFFER
Don’t think that there aren’t differences between services that support UV.  Just because they all deposit your rights into a central database doesn’t mean they don’t differentiate themselves.

For example: (And this is just my own experience & opinion)

HOW DOES IT WORK?
Assuming that you’ve signed up for an account on both VUDU (VUDU.com) as well as Ultraviolet (UVVU.com) and linked the together, which is part of the VUDU registration process:

WHY VUDU & ULTRAVIOLET?
There’s a lot of reasons why VUDU & Ultraviolet make a lot more sense than other services like Apple iTunes, Amazon Video, or even Xbox Video.

There is virtually no downside to using VUDU & Ultraviolet.  You can leave VUDU anytime you want and your Ultraviolet catalog will follow you to any other service that connects to UVVU.  You can access the content via live streams from any major device/platform.  You can download the content for offline playback at either SD or HD.

To start converting your dusty DVD collection to on-demand digital streaming, go to:

Remember the day you got admitted to UCLA?

I remember exactly where I was, exactly when it happened, and exactly how I found out.  And I’m sure all these Bruins will remember forever as well. #gobruins

UCLA made it to the 2015 NCAA Tournament. And they deserved it.

I repeat, we deserved to be in this tournament.

Before naysayers like Gottlieb & Lunardi complain about the Bruins getting a seed, there are 6 teams in the tournament with records having 13 losses, and none of them have a Strength-of-Schedule more difficult than UCLA. (Except arguably Indiana, depending on who you reference as a source)

Sure, we could have played a complete cupcake schedule early on in the season, like certain highly touted teams did (*ahem*) but instead we chose to play #2-seed Gonzaga, #4-seed North Carolina, #1-seed Kentucky, & #3-seed Oklahoma – all in the Top 15.  And yeah, we got whooped by Kentucky, but it’s not like ANYONE ELSE can say they beat the Wildcats, either.

So to sum it up: Had we gotten 4 wins playing cupcakes on a crap schedule, no one would be debating whether or not UCLA belonged in the dance with a record of 24-9. #gobruins

A short story from the Jubilee Project

Romantics or otherwise… you’ll appreciate this.

I got this in the mail a few weeks ago.  I had to put it down and let it sit for a while because… well, you read it: 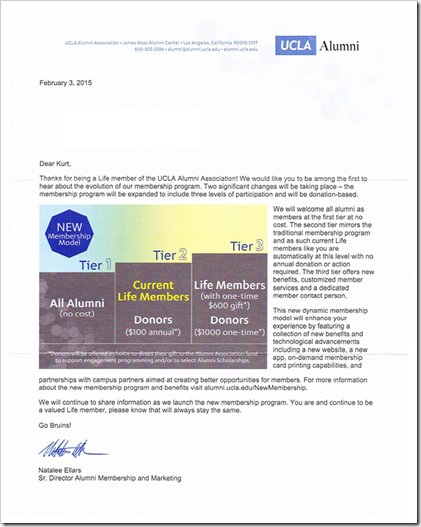 tl;dr:  If you want anything new out of your life membership as a UCLA alumnus in the future, pay $600.  Otherwise, no future investment will be made in your current membership.  And your current benefits may disappear over time.

So, apparently, my $600 Life Membership as a UCLA Alumni is great & all but UCLA needs more money. The Alumni Association has determined that the only way to compel life members to squeeze more out of it’s life members is to stop growing any value of the existing life membership and create some B.S. “new level” of Life Membership they call “Tier 3” – mandating yet another donation of $600.

For example, I noticed something in the image of the benefits listing:

Call me crazy but I get that 20% discount TODAY as a Life Member.  I just used it a week ago at the UCLA Store.  Are they saying that we’re losing that benefit unless we move to Tier 3?  Here’s the New Membership page:  http://alumni.ucla.edu/newmembership

I’m a pretty loyal alumnus… but this is rubbing me the wrong way.

Daylight Savings… the movie. And the sequel. GAHHHHHH

So you liked “Ready Player One”…

So you finished reading “Ready Player One” and loved it, ‘eh? (If you haven’t it’s one of my favorite books ever.  Here’s the audio book: http://www.audible.com/pd/Sci-Fi-Fantasy/Ready-Player-One-Audiobook/B005FRGT44/)

Here’s some other items to “continue the story”:

A note about “Fanboys” – Ernie Cline’s movie
Cline wrote the screen play for this movie:

“It’s 1998 and Star Wars fanboys across the globe eagerly await the release of Episode I. But for Eric, Linus, Hutch and Windows the term “fanboy” is more than just a title, it’s a badge of honor. Spurred by impatience and an undying loyalty to their cause, these former high school friends reunite to undertake the road trip of their fan-tasies. Traveling West across the country to visit their Mecca – George Lucas’ Skywalker Ranch – the plan is to break in, steal the film and stake their claim as the first fanboys in history to watch it. But to secure their place in the fanboy hall of fame, they’ll have to contend with bizarre bikers, a crazy pimp, a deranged group of trekkies and the quiet intensity of William Shatner.”