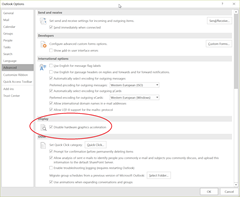 UPDATE 12/27/15:
Just to close out this blog entry, I have had ZERO crashes in several weeks now since “disabling hardware graphics acceleration” within Outlook 2016 on my Surface Book.

So either the problem lurks somewhere with the interchange between using the Intel-integrated Graphics in the chipset and the Nvidia 940M-class discrete GPU… or it has something to do with the Intel graphics alone, which is what I’m betting on because the Intel Display Drivers for the Skylake processor have been less than spectacular requiring multiple driver updates over the past month or so.

In either case, I never need “high speed graphics” within Outlook so… case closed.

So I jumped on a theory I had back when I was trying to debug the hardware:  I remembered that there’s one definitive link between Outlook & the hardware, and that’s GPU Hardware Acceleration.  If you look in FILE – OPTIONS, then click “Advanced” and scroll down the dialog box for a bit, you’ll see an entry there called “Display” with a checkbox value of, “Disable hardware graphics acceleration”.

This afternoon, I unchecked that checkbox in Outlook.  So far, no problems.  I’ll post back later with my results, if any.

UPDATE 11/30/15:
Yup.  I replaced the Surface Book with a brand new identical unit and lo-and-behold, I’ve been running Outlook without a single crash for the last 12 hours.

I was thinking earlier however that there’s one thing that I didn’t try with my previous Surface Book – not that it matters – but I didn’t try “disabling hardware acceleration” within Outlook.  Doing so would remove a major linkage between Outlook and the underlying hardware and may have pointed to a an issue with the GPU (Intel or Nvidia) or the drivers for them.

The reason I thought about this was last night, after reimaging my NEW Surface Book, I installed the downloadable driver pack for Surface Book (~200MB) and after completing the install, Device Manager lit up like a Christmas tree with different components no longer working.  Thinking it must be a temporary thing, I rebooted but no such luck.  Even the Wireless NIC failed.  So I reimaged again and used Windows Update for my source of drivers and everything has been hunky dorey since.

Which begs the question:  I used the driver pack previously on my first Surface Book and everything worked fine – except for Outlook.  Why’d the driver pack all of a sudden fail so horribly?  I guess we’ll never know.

My Surface Book runs great.  It’s fast. Windows Hello facial recognition works beautifully.  It docks and undocks well.  I have some issues with the power button accidentally getting pushed and it turning on in the case I store it in, but otherwise, it’s the best machine I’ve ever owned.

Except for one problem:
Outlook 2016 crashes regularly.

PROBLEM: “MICROSOFT OUTLOOK HAS STOPPED WORKING” ERROR MESSAGES
Every 30 min or so, Outlook 2016 crashes with a “Microsoft Outlook has stoped working” error message.  I have it installed through my company’s subscription and despite Outlook almost NEVER crashing on me in any version over the past 10 years. (No joke – going back to Outlook 2003, Outlook has been rock solid for me.  Keep in mind however I use virtually NO PLUG-INS outside of Lync/Skype for Business.)

SOLUTION: HARDWARE REPLACEMENT
Then I found the following post.  If it’s tl;dr for you, basically the problem is DEFECTIVE HARDWARE:

…did a full reset (reinstall Win10 and Office 2016) This didn’t clear the issue up… a replacement SB was shipped… not seeing the same issue with the replacement.

And honestly, this echoes the sentiment of Outlook-Apps.com, regarding Outlook crashes:

…based on our experience of over 10 years of Outlook related support, we can safely say that most Outlook crashes are actually caused by different reasons: a faulty Windows system (infected by a virus or badly configured) or hardware issues that trigger system-wide errors, including Outlook crashes.

I have a new Surface Book coming this afternoon.  I’ll update this post once I’ve confirmed that the issue was in fact hardware related.

But in the meantime, if you own a Surface Book and find Outlook crashing on you, and none of the things above work, it may very well be a hardware issue and you’ll need to return the unit for a new one.

7 Things You Need To Stop Doing To Be More Productive, Backed By Science