Regarding the “Courier” that the media seems to love so much… 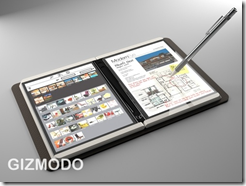 Let’s get this out of the way shall we?

The Courier was a bad idea.

Here’s the tale of the tape for the purported Microsoft “Courier” device that certain media reporters find so  fascinating and can’t seem to stop yapping about despite the thing being DOA for over a year now.

COMPONENTS:
Here’s a rough listing of the 3 most obvious components of the Courier that should have been red flags to anyone looking at the design.

On these 3 components alone, we’re talking about needing $370 conservatively in hardware whereas the iPad purports to cost $250 in hardware TOTAL.  Meanwhile, we haven’t even considered adding in the costs of the Courier’s:

And remember that it’s also using more than twice as much POWER as a single display tablet type device because of its dual displays AND the use of Active Digitizers.  This either means twice the battery, likely dramatically increasing the weight of the device, or just living with drastically lower battery life.

Now also take into consideration the following winning components of the Courier:

I’m really waiting for the reason why this device was ‘in need’ and to date, not a single member of the media has explained this.  What possible scenarios could compel someone to sacrifice battery life, cost, and weight for the Courier design?

A WORD ON PIONEER STUDIOS
One thing that keeps getting brought up is how this design was created by the “creative” and “independent” Pioneer Studios folks that “worked outside of the Microsoft machine”.  These were apparently researchers that thought of new stuff all day long and encouraged contrarian thinking.

This goes to a problem I think we have at Microsoft:  I question how much we spend on ultimately non-relevant research that never gets monetized or realized.  There.  I said it.  If someone told you that your company was going to invest $9 BILLION a year in something, you’d probably be very eager to see how that $9B investment was bearing fruit over the years.  Money that instead could have funding more salespeople or building a new product, either of which would bring in more revenue.

Well, so does most of Microsoft.  We all want to see what it is that we’re investing in as the world’s premier private basic research organization.  So we have this event annually called “Microsoft TechFest” where the researchers being supported by the $9B we invest annually show their wares and demonstrate the value of their research.

It’s not all honey and roses.  In fact, I think the early TechFest events bordered on demoralizing because the things being worked on were so out of line with the company’s actual revenue generating work that over the past decade I think a lot of agendas in MSR were “realigned” and today, you see a really demonstrable effort to show the value of the research being done and the tangible results of that research. (Something I applaud I might add)

Research for the sake of research doesn’t fly well with investors.  If you were told that over the past 10 years, Microsoft invested some $70 BILLION in Microsoft Research, would you be convinced that we got an adequate return on our investment?Well, Courier was an example of some of that research.

CONCLUSION:
Not all innovative ideas are good ones… or even practical.  It was brave of our leadership to let Microsoft get creative about device design and brainstorm ideas.  But when it gets down to brass tacks:  There has to be a business plan behind these ideas, otherwise they get the axe.  Period.

Anyone from the media the hails the Courier as ‘innovative’ or a ‘lost opportunity’ for Microsoft needs to get their head examined and their credibility seriously challenged.  It should be readily obvious to anyone, if not from a financial standpoint but from a use case standpoint, that this thing wasn’t just a financial disaster waiting to happen… it was just plain a solution without a problem.