Where is Donald Trump’s Star on the Hollywood Walk of Fame? 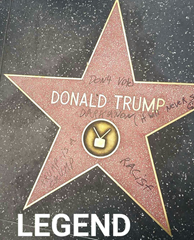 So you’re looking to find Trump’s star on the Hollywood Walk of Fame, are you?

Look no further: I’ve got it mapped out so you should have no problem locating it.

ADDRESS
The address on the Hollywood Walk of Fame web site is wrong.  It’s actually closer to:

…so you’ll probably wanna plug that into your phone or GPS.

PARKING
Self parking is available at Hollywood & Highland, a shopping complex immediately in front of Trump’s star.

Entrances to the parking lots are on Highland Ave or Orange Dr and lead underground.  You will have to walk a bit through the shopping complex to get back out to Hollywood Blvd.

MAP
Here’s an overhead map of the area.  https://binged.it/2ju5LUB

STREET VIEW
This is what the street view looks like.
https://binged.it/2ju3KHP

FINDING TRUMP’S STAR
As you can see, it’s near a Sephora & an American Eagle.

There are two grates in the sidewalk:  One are outdoor elevators used for loading stuff underground.  The other are air vents.  Trump’s star is between these two grates.  It’s also right beside the star for Kevin Spacey.

I’m sure there are many people that feel awful after today.  And despite the positivity of the marches going on today, both in defense of women’s rights & protest of what will likely be the most unethical & dishonorable president in US history, there are people that are probably wondering, “What do I do now?”

This is the day 33 senate seats, all 435 seats in the House of Representatives, and 14 governorships currently held by Republicans will be up for reelection.

Donald Trump currently has a royal flush, with Republicans owning both the house & the senate, not to mention a huge number of state governor’s.  If you’re wondering what to do now, the only way to resist the current administration is to attack his power base & that’s Congress & your local politicians.

Much of this is discussed in this article:

To add Election Day to your Outlook or Mobile Calendar (through a .ICS file), download the following:

What an amazing fan film.  20 minutes of sheer bliss.  There is a momentous & epic feeling to this prelude that the other films haven’t had since Star Trek II: The Wrath of Khan.

Well, the Prelude (and the money) was so good that CBS/Paramount sued the creators/producers for copyright infringement.  Here’s a video that goes over the lawsuit.

Alec Peters lost the suit… and everyone mourned what looked to be the end of Axanar Productions. Today, it was announced that a settlement had been reached.  Instead of a feature film, 2 15min short films will be released, meaning that Alec Peters is having to rewrite and rejigger his plans.

But at least one good thing came out of this.  As Alec Peters said today to Ars Technica:

“We’re not paying anything.”

For more on the conflict over Axanar, visit the article on Ars Technica:

For more on this film, visit their web site.  And maybe donate a buck or two.

This is for all the new fathers or soon-to-be-fathers out there.]

You’ve probably heard some folks say that you need to get on the ‘waiting lists’ for infant care, toddler care, preschool, etc. as soon as possible.  Be prepared to pay ‘placeholder’ fees, tuition fees for ‘classes’ that you’re required to take, and orientations for prospective parents.  And you’ve probably also heard them say that if you waited until your kid was born, you’re probably too late.

I hate to bust your balls, pal, but “they” were probably right.

It turns out, depending on where you’re thinking of putting your kid and when you plan to placing them there, the right time to start investigating child care is… well… totally random.  Some places required that you be on their list a FULL YEAR & HALF in advance.  That’s right:  Before the baby was even CONCEIVED.  Others have long lists that you have to put yourself on, where you may get bumped to the back due to where you live or what social status you have.

The bigger problem however is that on the Westside of Los Angeles, there are VERY few day cares.  Infant care is virtually nonexistent.  Toddler care is better but it’s still difficult.  Bottom line:  As soon as you know you’re going to need a preschool, get movin’ rookie.

A PLACE TO START: BOOKS ABOUT PRESCHOOLS
Fortunately, there are a few references out there that’ll give you a place to start.  Here are two books I picked up that provided some guidance, along with easy to reference telephone numbers.  These are books about Los Angeles PRESCHOOLS and not all preschools provide “infant care” or “toddler care” before your kid reaches preschool age so you’ll just need to read and find out which work for your needs.

Personally, I found the “The Whitney Guide” to be much more complete however often surprisingly lacking in accuracy in the commentary.  The “Coping with Preschool” book was much more on the spot, despite being 2 years old however it only covers some 30 schools and most are NOT on the Westside LA.  Nonetheless, I actually felt a lot better having read through at least these two references before we started picking and engaging schools.

ANOTHER ARTICLE ABOUT LA PRESCHOOLS
Just this February there was an article written in the LA New Mom Examiner about this exact topic for folks with kids in Los Angeles.  Sharon Bordas recommends the same books I’ve put into this post …probably because they’re the ONLY books out there.

Sharon Bordas also recommends looking at this online directory of schools in your area:

We had our son at UCLA Santa Monica, one of 3 places we considered.  (I’ll talk about why we selected UCLA Santa Monica in another post some day)  And overall, I’d say that having our son there was the absolute best experience we could have imagined.  Especially considering we were there for 9 days while most new parents are in and out in 3 or 4 tops.

A WORD OF WARNING…
One thing that you might consider doing, especially if you really want to “do things right”, is treating the attending nurses to some sort of snack or treat during your stay.  After all, they’re taking care of you – you really ought to consider ‘taking care of them’.  (For those of you that don’t understand this concept – you may want to go marinate in the world a little more before you actually have your kid because this is How-To-Get-Along-With-Service-Workers 101.)

Anyway, in this effort, I learned an important lesson specific to UCLA Santa Monica’s Birth Place, while there:

WHY?
As professional as 99% of the nurses are at UCLA Santa Monica, there are a few that… well… take the whole “weight gain/loss” issue very seriously.  Some of them, I might even say, take it a bit TOO seriously and are just a donut away from going off on a tirade about how every pregnant couple that comes in, buys donuts and candy and sweets and it makes it so hard for the nurses to eat healthily and blah blah blah rant rant rant ad nauseum.

In fact, there’s at least one, uh, eccentric young nurse there that I came by our maternity ward room that felt like it was her God-given duty to ‘protect the other nurses’ from what she implied was the sin & treachery of the donuts we had brought and on top of the obligatory rant, went on to uncomfortably suggest that I take it all back because ‘it was unwanted here’.

Riiiiiiight.  I decided to drop the donuts off with the more friendly nursing staff in the “Birth Place” employee lounge who promptly dug into them and left the boxes open for all to consume.  Our son’s handsome picture was promptly put on the office door along side the other newborn photos.

CONCLUSION
So in the final analysis, if you’re gonna bring stuff to ‘express your thanks’ to the nursing staff, be aware that not all of them will welcome sweets.  If you do bring “sinful & treacherous” edibles, I would suggest you at least also bring an alternative.  Or face the wrath of those on “Jenny Craig”.

Ricardo Montalban… a letter to his son

In a Dear Abby column several decades ago, Ricardo Montalban was quoted as writing the following for his son and it’s stayed with me to this day.  I find it interesting that I still remember it, now that I too am a father. 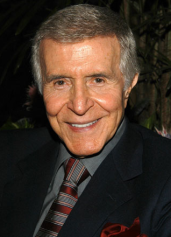 As long as you live in this house, you will follow the rules. When you have your own, you can make your own rules. In this house we do not have a democracy. I did not campaign to be your father. You did not vote for me. We are father and son by the grace of God, and I accept that privilege and awesome responsibility. In accepting it, I have an obligation to perform the role of a father. I am not your pal. Our ages are too different. We can share many things, but we are not pals. I also am your friend, but we are on entirely different levels. You will do in this house as I say and you must not question me because whatever I ask you to do is motivated by love. This will be hard for you to understand until you have a son of your own. Until then, trust me.

The EFF takes on the Trump Administration

The Electronic Frontier Foundation is calling on tech companies to unite in defending Internet users against Trump & and his authoritarian disregard for a citizen’s privacy.

Here is the ad they are taking out: