UPDATE 6/5/17:
Looks like in the latest flyer for LEGOLAND California, they are advertising the latest special Pop Badges for July 4th & for July 28-29.

And they provide a bit of information about the mysterious Gold Pop Badge as well.  Looks like they are having as many as 10 park employees wear Mr. Gold pop badges and even providing hints on poster, which seems to be a big jump in help obtaining the badge compared to previous Mr. Gold campaigns.  (Hope it’s not ‘too easy’.)

ORIGINAL POST 3/13/17:
Our family is pretty loyal to Legoland California.  We’ve been to the other theme parks & resorts in Southern California but the only one we buy an annual pass to is Legoland.

INTRODUCTION TO OUR FAMILY & LEGO 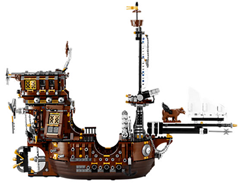 My son in particular loves Lego.  When he was in pre-school, he assembled the LEGO Movie 70810 Metal Beard’s Sea Cow by himself – all 2,741 pieces. I never placed a single brick on the model for him. (For those not aware, the Sea Cow is one of the largest LEGO sets on the market)  He’s since also completed:

And his biggest current accomplishment:

LEGOLAND CALIFORNIA “POP BADGES”
One of the collectibles that LegoLand has that seems to be lesser known is Pop Badges.  These are plastic badges that adhere to your kid’s Legoland lanyard or their shirt and represent some special accomplishment or feat.

First news of the Pop Badge Challenge was on this site: https://legolandcalifornianews.com/2016/03/17/collect-your-limited-edition-pop-badges/

They actually first started in the LegoLand Park in the UK, where they’ve been handing them out

Since then it’s been a quiet pursuit of Lego fans that visit the parks.  If you go to LegoLand California, you’ll very occasionally notice some kids walking around with badges on their lanyard or their shirts. These are badges of pride as “they know” about the pop badges and collect them aggressively.

HOW DO YOU GET THEM?
All you have to do is ask the ride operator for one.  Some of the bigger rides have them.  Here’s a few that we’ve obtained:

These are the badges that you can get by asking the Model Citizen (MC) running/hosting the ride.  Here’s the ones for Heartlake City Horse Riding, Ninjago the Ride, FunTown Firefighters, and The Dragon Rollercoaster.

HOTEL BADGE
If you stay at the LegoLand Hotel, you MAY get a pop badge.  This badge lets you and your family into the park at 9:30AM – a half hour earlier than anyone else to ride a small selection of rides.  They usually include Coastersaurus, Lego Technic, Heartlake City Horse Riding, and Safari.

KING’S GOLD
If you go through Castle Hill, you may wander past an area that looks like panning for gold.  That’s exactly what it is.  For $3, you can receive a pan and start go through the river sand looking for a nugget of gold.

It’s a fun activity for the kids and if they find one, they can turn it in to the cashier for a gold medal from the King’s Treasury.  This is what it looks like.  It’s not technically a pop badge but you’ll find kids wearing them with pride nonetheless.

These are badges that you can obtain if you visit LegoLand during the month of October SPECIFICALLY during their special “Brick-or-Treat” days, where they had out treats and have other special activities for kids dressed up for Halloween. The photo above is the set from the 2016 Halloween.

GOLD BADGE
There is reportedly someone with a special rare “Gold” pop badge wandering the park.  We’ve never encountered it while there but photos of the supposed-badge look like a gold-colored badge showing a gold mini-figure on it reading, “Take me to guest services”

There is a sign in the Legoland Hotel that briefly talks about it near the elevators and it describes the badge as being very rare and worth something if you turn it into guest services.  At the UK Legoland, it looks a bit different, showing a ‘gold brick’ on the front and it is reportedly worth a free ticket to the park – but it requires that you turn the badge in to guest services, meaning you lose the badge as a collectable.

This entry was posted on Monday, March 13th, 2017 at 8:02 am and is filed under Uncategorized. You can follow any responses to this entry through the RSS 2.0 feed. You can leave a response, or trackback from your own site.