On Geek Entitlement & the Isolating Nature of the Internet 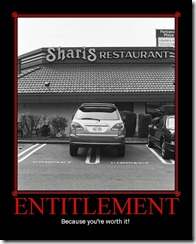 Recently, someone whom I’d never met (who shall remain nameless) posted a rather long comment to a post I made about HP’s WebOS-based “TouchPad”.  It was basically a list of reasons why the TouchPad would succeed and frankly it initially sat in moderation on my blog for 24 hours because I don’t post or comment that frequently to this blog.  It’s just a place for odds and ends that are usually opinion based that I can share with friends.

Unfortunately, it came in during a timeframe in which I’d gotten into a car accident and suffered a rather uncomfortable concussion making me both nauseous & “foggy” so I found myself forcibly convalescing for a bit after having had a Computed Tomography (CT) Scan at the local hospital that examined my condition.  (Y’know, I knew that in retrospect something was wrong when I realized that I didn’t tweet about any aspect of the experience of the car accident, the details of the damage, how I got to my physician’s or the hospital.  Nor did I TwitPic the CAT scan machine.

So I spent most of my ‘downtime’ consuming complete & total infojunk.  We’re talking serious lizard brain stuff.  Stuff that doesn’t require any thought or mental exercise considering the haze my brain was in.  Anything on Cheezburger, College Humor, or Holy Taco would do… you know what I’m talking about.  Even GraphJam would have probably required too much rational thought for me.

THE WRATH OF KHOMMENTER
Well, sure enough, this person couldn’t understand why I hadn’t responded to their comment within 24 hours and snapped back with a comment that said as much.  Heck, 48 hours seemed unacceptable.  They appeared to actually consider it “rude” not to reply back to what they called a “long and well thought out” argument posted to my blog and wrote a couple of smartass comments to emphasize her displeasure with my apparent “snubbing” of the original post.

Now most people I know scrawl something on sites and regardless of their comment’s length (I tend to be wordy & verbose as y’all know) they’ll check back occasionally, and if anyone’s responded within a bit, great!  Party on.  If not, oh well.  At least there was the opportunity to flex one’s own mental muscles and clarify one’s opinion in their own mind.  Moving on.

But not this commenter.  They wuz gonna get satisfaction!  One more ‘signing off’ comment was to be written to really ‘stick it to me’.  Even after I’d said that I’d get to a response… when of course I could.

THE INTERNET DIVIDES & ISOLATES AS MUCH AS A IT EQUALIZES & BINDS
Now, normally I wouldn’t go into that much detail about my personal life but what follows is what I thought was an interesting story about people on the Internet & the sense of entitlement that some have – particularly tech geeks in this moment in history.

I got to thinking that the Internet has begun to gestate behaviors that seem to reflect the de-evolution of civil discourse as people interact more and more exclusively via computer instead of face to face.  Continuous instant gratification on the Internet, for instance, has given rise to snap judgment & childish impatience.

Additionally, despite the fact that the Internet makes huge amounts of information available, it doesn’t help people consume said information in a balanced manner in which two sides of a situation are presented.  Republicans read Republican content.  Democrats read Democratic content.  And never the twain shall meet.  Oh, people SAY they walk both sides but I find this to be fairly untrue.  It’s human nature to simply ‘hang out’ with those that are of like thought.  And the result is that the ability of individuals on the Internet to wallow in content that represents only their own opinions and their own world view has increased intolerant tendencies.

“THE GEEK SHALL INHERIT THE EARTH”
The old saying used to be “The meek shall inherit the Earth,” right?  In the 80’s the most attitude you got from geeks was getting wardialed nonstop for 24 hours if you really pissed them off.  The bit about “ruining your credit” or “causing government tax issues” was a giant myth.

But in the 90’s, the rise of the computer in the workplace, really spawned a culture of arrogance.  Anyone remember, “Nick Burns:  Your Company’s Computer Guy”?  Jimmy Fallon played the resident IT guy in a small firm that bossed users around and berated them for not knowing arcane Ctrl-key commands or what he perceived were basic functions of the computer.  Small numbers of people had important knowledge that secured their roles as experts, making them ‘portals of wisdom’ yet bottlenecks of information distribution.

Now, here we are in the 2000’s and the geeks have truly inherited the Earth… because to some extent everyone’s become geeky.  The Internet has empowered everyone to be knowledgeable.  People have answers at their finger tips simply by searching the Internet.  Individuals are able to share their expertise openly through pre-built forums, blogs, and Wikis.  A virtual paradise of harmony & equilibrium exists for information with everyone having access to everything instantly. 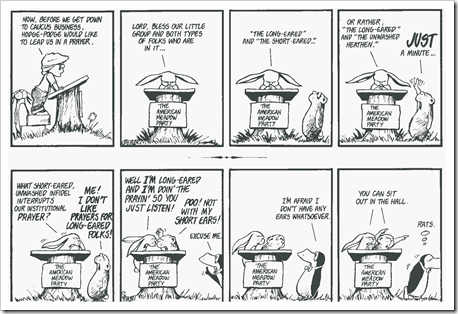 “PEOPLE EDUCATE THEMSELVES ABOUT WHAT THEY ALREADY KNOW”
I really think we’re taking both two steps forward and two steps back and in the process deepened the chasm of understanding between opposing sides of any issue.

The Internet has made it much easier for people to develop into informational bigots.  While people have infinitely more knowledge available to them… they don’t.  Instead, they lazily more often choose to educate themselves only about things that interest them or already align with what they believe, otherwise validating their current belief system.  Few people want to accept the challenge of reading something that contradicts their opinion and otherwise causes them to uncomfortably think about how they might possibly be wrong.  I should know:  I find myself a victim of this mannerism myself when I’m not paying attention.  It’s simply easier to bathe in the light of self-righteousness than to challenge one’s belief system.

The Internet, respectively, has also made it completely possible to cocoon & isolate oneself in one’s own world.

Arising from developing narcissistic tendencies, Internet users seem to become more intolerant of perspectives that differ from their own, a syndrome that I see more and more as Internet culture grows & evolves.  And I’m not talking about differing opinions, mind you:  I’m talking about PERSPECTIVES.

Yes, the very medium that is supposed to create and enhance communication & bridge boundaries is building greater & greater rifts, creating shorter and shorter levels of tolerance, and isolating people to their own thoughts and opinions to a larger extent than they ever were pre-Internet.

This entry was posted on Tuesday, March 8th, 2011 at 8:03 pm and is filed under Uncategorized. You can follow any responses to this entry through the RSS 2.0 feed. You can leave a response, or trackback from your own site.