The Unfortunate Demise of 97.1 Free FM in Los Angeles 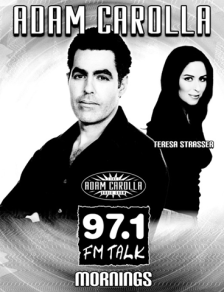 I was pretty taken aback by the demise of 97.1 FreeFM.  Carolla, Leykis, Bonaduce, Conway & Whitman… I’d tune in to hear them every so often (especially when KROQ played the overplayed “Red Hot Chili Peppers” or much HATED “System of a Down”)  Even if Frosty, Heidi, and Frank were on, I’d still listen because even they were good for a laugh or two.

It seemed that the transition to AMP Radio was one that was in the works for a while.  Which meant that things weren’t going all that well at 97.1 FM for a while.

There were straight up accusations made by Frank Kramer from the FHF Show and Adam Carolla seemed to imply the the reason for the station’s demise in his final show.  Tom in his defense stated that “CBS never approached him about taking a paycut”… however he never said anything about CBS asking for a renegotiation of his contract which semantically is an entirely different thing.

Then one day, I found this written by someone calling himself “PaidMediaAnalyst” on Tom Leykis’ own board:

As someone worked for CBS Radio (over 7+ years until FEB 13 09), I can confirm that all syndicated and non-syndicated on-air and production staff were indeed asked to re-negotiate their contracts last OCT 08. The requisite 90 days passed and all but one on-air show collective agreed to do so. I’ll let you all speculate which show that was.

Since SEPT 08, CBS Radio knew this would be a make or breaking point for the future of their business. We were all scared of what the eventual outcome would be. The bean counters in NY all knew they (CBS Radio) needed an option in case things wouldn’t align in their favor. Image packages, drops, beds, etc, were all produced are procured in late 2008. Hardware was purchased and delivered to CBS LA ENG Group for installation weeks ago. Systems were tested, on air availability of the systems were proofed and confirmed. It was then the day to morph into Vibe was quietly announced prior to FEB 18th.

I really believed we provided an upscale product within a niche no one else could service. With current economic times, it just wasn’t marketable to the extent required to support the operation and produce a profit – end of story.

A footnote; since Serious XM Satellite Radio has been on the skids, Stern’s show has also been asked to re-negotiate their contract. The entities involved with that negotiation are not faring well. Since Serious/XM dodged a bankruptcy bullet by agreeing to have Liberty Media acquire 44+ % in cash and stock, it looks like the same people who bring you DIRECTV will have a new product themselves, but it won’t obviously be a Howard Stern Show at $100 million a year for the next 22 months… not likely at all.

I have been in the radio industry, terrestrial and satellite, since 1980. I have worked in the LA market (mostly in syndication) since 1987.

So if you take this as gospel, which most of even the forum boards seem to be, I think that pretty much answers the question:  “What happened?”.  If you read between the lines, it’s would appear that Leykis’ decision to not renegotiate ultimately was the lynch pin in the station’s final change to a new format.  He was not the fundamental cause of the station’s demise – that can be squarely laid upon the station’s format and management.

But he was the straw that broke the camel’s back.  They needed to rebalance the books and their long term debt and Leykis wasn’t going to budge for better or for worse.

This entry was posted on Wednesday, March 4th, 2009 at 1:06 am and is filed under Uncategorized. You can follow any responses to this entry through the RSS 2.0 feed. You can leave a response, or trackback from your own site.

3 Responses to The Unfortunate Demise of 97.1 Free FM in Los Angeles