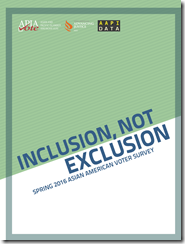 Here’s some of the conclusions that it came to as written in the Executive Summary:

Asian Americans have, for nearly two decades, been the most rapidly growing racial group in the United States. More recently, they have also been growing significantly in their political presence, as measured by the growth of registered voters (an average increase of 600,000 per presidential election cycle), Congressional candidates (from 10 candidates in 2010, to 30 in 2012 and 40 in 2016), or the number of organizations involved in voter registration (from 154 participating in National Voter Registration Day in 2012 to 317 organizations in 2014).

Along with the growing presence of Asian American voters is a growing interest in the opinions and priorities of this electorate. This report presents the results of interviews conducted by telephone from April 11 to May 17, 2016, of 1,212 registered voters who identify as Asian American, producing an overall margin of sampling error of +/- 3%. Sampling was targeted towards the six largest national origin groups that together account for more than 75% of the Asian American adult citizen population. Interviews were conducted in English, Cantonese, Mandarin, Korean, and Vietnamese, and included landlines and mobile phones.

The data on Asian American public opinion reveal that:

This entry was posted on Sunday, June 19th, 2016 at 12:19 pm and is filed under Uncategorized. You can follow any responses to this entry through the RSS 2.0 feed. You can leave a response, or trackback from your own site.