What Vegas cabs charge the most per trip?

With CES coming up, it seemed like a good time to write up my annual post about taxicab longhauling.

I love Las Vegas but something that always bugs me is getting longhauled (being taken extra long routes just to increase cab fare) by unscrupulous cabbies to increase their total fares & meet the company’s expected quotas.  It’s something that bothers me because I would rather let a cabbie – my service provider – keep the change from a $20 bill then get longhauled and have the taxi company take all my money… who frankly, I couldn’t care less about.  In fact, longhauling reached epidemic proportions in 2013, so much so that people started writing about it:

FOLLOW THE MONEY!
So the question I wondered was:

Well, it turns out that the Nevada Taxicab Authority keeps public records of taxicab company revenues in multiple categories including:

And this is where it gets interesting and maybe even obvious.  But I’ll let you draw your own conclusions.

Here’s a snapshot of each cab company’s “Revenues per Trip” for October 2013, i.e. “Who makes the most money per trip on average?”  In particular, look at the top 3:  (Note: Before you make the assumption about “Deluxe” & “A-Cab”, keep in mind that if you are a tourist on the Vegas strip or arriving at McCarran Intl, you will never see these taxis because they don’t service tourist areas like the Las Vegas strip.  They only service Vegas locals & as a result, their fares tend drive farther & cost more.)

For a more visual comparison, here’s a chart:
(I’ve highlighted A-Cab & Deluxe’s averages since they are for all intents & purposes, not relevant to Vegas tourists visiting the strip)

So now take a look at the top 3 companies on this snapshot of “Revenues per Shift”, i.e. “Who’s cabbies make the most money on fares?”:

Again, for a visual comparison:

Now take a look at the top 3 companies on this snapshot of the “Revenues per Medallion”, i.e. “Who’s cabs are driven the hardest to make the most money?”: 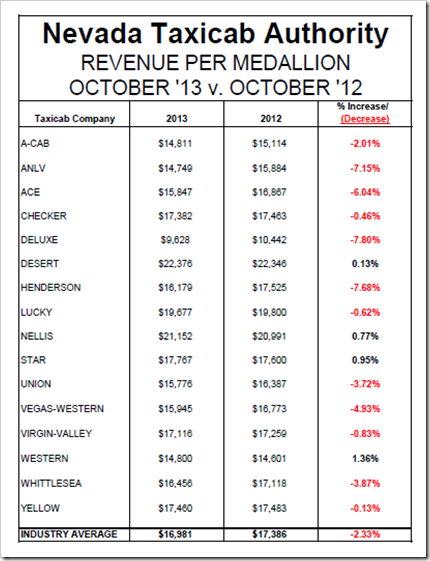 Noticing a pattern?  Uncanny isn’t it?

If so, the next time you’re about to enter a cab in Vegas… y’might want to look at the name on the side of the cab and ask yourself, “Am I about to be taken for a ride?”

This entry was posted on Friday, December 13th, 2013 at 11:30 pm and is filed under Uncategorized. You can follow any responses to this entry through the RSS 2.0 feed. You can leave a response, or trackback from your own site.