Kids. They remember their friends, even when they’re very young. 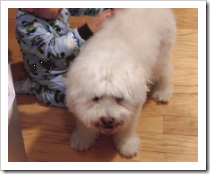 Today, our son’s daycare teacher asked the class, “Do you have any siblings?  Or pets?”  Kids in the class said that they had a sister & a cat.  Or two brothers.  Or two dogs.

When asked, my son dipped his head & told the teacher:

Confused she asked him, “You had a dog?” and he nodded & said nothing.  When my wife came to pick him up this afternoon, the teacher asked her about that, and suddenly it became clear to her what had happened.

My wife came home to tell me this story during dinner.  I had a hard time choking back the tears to finish my meal. 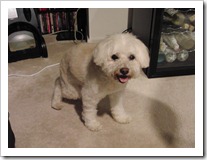 2 YEAR OLDS DO REMEMBER THEIR FRIENDS
We often wondered how much our son understood when Sheepa, the family dog, passed away.  He was very gentle and was always friendly with our son, never biting him or barking at him even though my son would pull his fur or yank an ear.  He’d be annoyed but for some reason, he always knew who this little person was, much like he’d know when my wife was ill.  Whenever my wife would stay home in bed, Sheepa would sit or sleep next to her closely & quietly.

When Sheepa had passed, I had trouble sleeping & slipped into a depression which I eventually pulled out of by focusing on the positives of Sheepa’s life.  What I didn’t realize was that during the first week in particular, my son had night terrors that were probably caused by Sheepa’s passing.  He would wake up screaming and be inconsolable.  I kinda thought that the connection between Sheepa’s passing and our son’s sleep issues was weak… after all:  How does a 2 year old understand concepts of death & ‘forever’?

TALKING TO SHEEPA… ON THE PHONE
Later, while changing his diaper on the changing table, our son grabbed in the intercom phone on the wall.  He put it to his head and said, “Hello Sheepa”, and I froze.  I asked who it was on the phone and he replied, “Sheepa”.

This has happened at least a dozen times now.  Again, I thought it was a stretch that he did or didn’t understand the permanence of Sheepa’s departure from us.  But this was… different.  He actually seemed to have conversations with him specifically and only when on the intercom handset.  I can only imagine what it sounded like if there was anyone downstairs listening in on our intercom conversation with our dog.

BUT THERE’S THE PROOF:  RIGHT FROM DAYCARE
So that’s why, when we heard that our son had said sadly, “He had a dog,” we knew he understood.  He remembers Sheepa and knows that he’s gone.  His friend no longer lurks under his seat waiting for falling food.  He no longer sneaks into our son’s bedroom to patrol or say ‘hi’.  And he no longer comes to the park with him to walk through the grass on sunny days.

I guess that shouldn’t come as such a surprise, but I also now know he’s sad about it too.  And there’s part of me that’s sort of comforted by that because I think it means Sheepa affected him in a positive way, in his own way taught him to appreciate dogs, and most of all, the value of friendship from a very young age.

I know memories fade easily at this age… but I hope he remembers him.

This entry was posted on Tuesday, June 19th, 2012 at 1:29 am and is filed under Uncategorized. You can follow any responses to this entry through the RSS 2.0 feed. You can leave a response, or trackback from your own site.