What is the Vegas “tunnel”? An illustration.

I thought this would be fun.  People talk about getting ‘longhauled’ through the ‘tunnel’ in Vegas but I’ve never seen it illustrated.  So here’s a map of where the tunnel is & why it screws visitors by taking them “out of the way” & increasing the cab fare.

Below you can see McCarron International Airport.  The main road that leads out of McCarron is Paradise which heads north past UNLV’s Thomas & Mack Center, toward most of the strip properties. 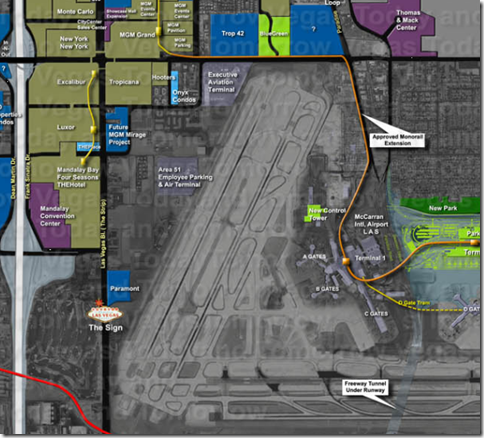 Now if you look south of the airport, you can see a label that reads, “Freeway Tunnel Under Runway”.  This is the infamous tunnel people talk about and as you can see, it’s headed NO WHERE NEAR any of the hotels.  In fact, it’s headed in the opposite direction of of the strip properties.  Usually from there, an unscrupulous cabbie will take the freeway, running up the miles driven & further increasing your fare.

This ‘detour’ unnecessarily adds $5-$15 to your fare & no matter what the cabbie says, it’s NEVER NECESSARY.  Here’s a list of excuses I’ve gotten from cabbies that have attempted to explain why they want to take the tunnel:

This entry was posted on Sunday, January 8th, 2012 at 5:39 pm and is filed under Uncategorized. You can follow any responses to this entry through the RSS 2.0 feed. You can leave a response, or trackback from your own site.