Children speak the truth… even when they don’t speak. 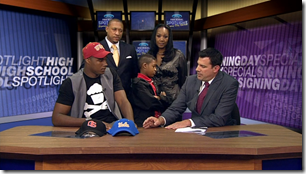 Why is this a big deal?  Torian originally committed verbally to UCLA.  Here’s the video:

Putting aside any biases toward either school, this video you tells everything you need to know about how his family felt about the surprise announcement and is otherwise a case study in “facial tells”.   Take a look at some key moments:

…there’s a ton of other tells but you get the picture.  And speaking of tells, Joe White made a comment that you can read in UCLA forums about "people pushing Torian toward USC" but didn’t disclose who those people were, but if you listen to the uncontrolled female squeal of delight at :59, and I think you’ve got your answer as to who those people were.  Need more?  Watch the following minute after :56 and there is only one person on camera that’s smiling, and it’s not Joe, Jason, or Torian.

(Epilogue:  Later that day, Torian White changed his mind and reversed his decision.  He’ll be suiting up for UCLA this fall.  Go Bruins.)

This entry was posted on Wednesday, February 2nd, 2011 at 9:12 pm and is filed under Uncategorized. You can follow any responses to this entry through the RSS 2.0 feed. You can leave a response, or trackback from your own site.