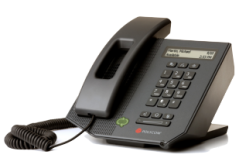 To the right, you see a photo of the Polycom CX300 Deskphone for Office Communicator.  It’s a fantastic phone.

Now some people in my organization – for a very long time – preached the elimination of deskphones in favor of “USB-connected headsets” or “small portable speakerphones”.  “Why do you need a deskphone?” they say.  “Just use a headset!”  This is of course much hooey and just plain makes me resentful.

STOP TELLING ME TO CHANGE MY BEHAVIOR
I’ve been using a deskphone for more than 28 years.  I’m comfortable with it.  You don’t change a person’s behavior overnight & the audacity of those that think that they can force a “change of the rules” in the name of their purported paradigm shift on users is simply pure arrogance.

There is little incentive for users to do something so weird as to use a firkcin’ headset day-to-day instead of a perfectly good deskphone when it’s perceived as an annoying change.  As an office worker, I get up a lot – for whatever reason be it to stretch my legs, get coffee, pick up a printout, visit coworkers, pick up lunch – and this means taking off & putting on my headset over and over again when I try to use it.  A UC-enabled deskphone for individuals like myself would be such a nice transition.

EVOLUTIONARY TRANSITIONS ARE IMPORTANT
More importantly, a salesperson doesn’t endear their product to users when they don’t provide them with a transitional/evolutionary bridge to your technology.  Cripes – Didn’t anyone learn that from the 32bit-to-64bit war between Itanium2 & AMDx64?  (For those that don’t know this drama, Intel arrogantly proclaimed the Itanium 64-bit chip line the next evolution in microcomputer processors but despite having superior performance and scalability to competing processors, didn’t provide customers with a seamless transition from the 32-bit Pentium line.  Old apps wouldn’t run as fast… or at ALL in some cases… and software had to be recompiled and tested to run on the new chips.  Meanwhile, AMD released the AMDx64 chips which provided 64-bit computing while providing virtually 100% compatibility with previous applications & OS’s.  Guess which won?)

I love my deskphone & I love my old CX200.  (The CX300’s predecessor) I’ve gone so far as to BUY extra CX200s for my coworkers to get them endeared to Unified Communications and it’s worked.  I hope some others follow suit and figure this out quickly because I’m getting tired of hearing about end users that hate the headsets they’ve been given.  The CX300 and it’s big brother the CX700 are the key to bridging people over to the world of superior Unified Communications.  Of this, I am certain.

For more information on the Polycom CX300 Deskphone for Office Communicator:

This entry was posted on Sunday, March 28th, 2010 at 7:42 pm and is filed under Uncategorized. You can follow any responses to this entry through the RSS 2.0 feed. You can leave a response, or trackback from your own site.