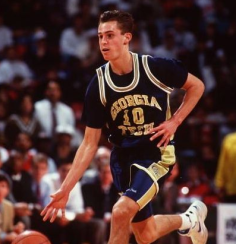 One of the things I always remember back before getting married was a trip to Italy where I sat down to breakfast and met Drew Barry, all-time assists leader from GeorgiaTech and son of NBA All-star and legend, Rick Barry.

A friend and I were on a trip to Cervinia, Italy to ski/snowboard (Italian Alps/”The Matterhorn”) which was a trip that I’ve taken many times before, but we had taken a detour from Milan and stayed one extra night in a city called Varese which was a little out of the way but whatever.  We arrived at a hotel that was quaint, quiet, well kept but very very very old.

VARESE HOTEL… THE QUIETEST PLACE ON EARTH
You could tell the hotel had stood the test of time by the architecture, the narrow hallways, the decor, and the furniture.  I saw items with descriptions near them written in Italian that I couldn’t read but I certainly understood the dates:  Stuff like 1729 and 1863.  With the ambiance of the dimly lit room and the antiques that populated each room, I got the feeling that I was surrounded by the ghosts of European wars past and couldn’t help wondering who’d visited these halls over the past 2-3 centuries.

Did I mention there was, like, no one there?  Seriously – we were the only ones in the hotel.  Besides the innkeeper, the place looked completely deserted.  If not for the lights, one might have thought the hotel had been closed for the ‘off season’.  (During the winter, I guess, Europeans don’t stay in places like this… probably for good reason.  It’s very dreary, cold, and quiet.)

I sat in the dining room with my friend and as we were being served salami, cheeses, wine and other items, we listened to the most obnoxious silence one can imagine.  It was really uncomfortable speaking in the room because when you said something it echoed and was the ONLY thing you heard.  There wasn’t any background noise… there wasn’t even that “high pitched screeeeee’ that you hear in America when everything is quiet.  (I think people’s brains block out that screeeeeee sound it’s so common)

WHEN ARE YOU GONNA GET TO DREW BARRY?
So anyway, while were sitting there, the silence was broken by some other people walking in!  A very attractive couple trotted in and sat at the table next to us.  They looked very young and appeared American.  I remember looking at the guy and thinking he looked a little familiar.  His girl was, well, really beautiful… I mean, she wasn’t over the top ridiculous-superstar attractive but she had a grace & style that was very down-to-earth, inviting and was a very good match for the guy who was tall, athletic, and well-groomed.  Especially for Italy where we’d seen a lot of guys that could use a shave, haircut, makeover, and for God’s sake, a bath.

With nothing better to do, I spoke up and asked them where they were from.  The guy said they were travelling for his work so I asked him what he did.

Bingo.  Being the collegiate basketball freak, I immediately blurted out, “Whoa – what’s your name?”  He said, “Drew Barry”.  I stammered, “Drew Barry?  As in Drew Barry of Georgia Tech, son of Rick Barry, brother of Jon & Brent Barry?”  His girl’s face lit up from my recognition as he smiled meekly and said, “Yeah.  You remember me?”

Drew Barry played for Georgia Tech and was the school’s assists leader.  I saw him play a few times and really, you can’t help but watch a kid play when his genetics lead to one of the greatest NBA players in history.  We talked a bit and I found out that Drew was with a European team now.  I guess the NBA hadn’t panned out for him but he was playing for a team (Poland, I think?) that had been travelling to play someone in Italy and his girl was travelling with him.

I had to believe that that must have been hard on her but I couldn’t say anything because I figured she was just being supportive of her guy and man, there’s something in my heart that chokes me up a little when I think about that level of loyalty:  Going to countries that don’t speak your native tongue, not being employed, not even being able to watch English language TV other than BBC World, watching your guy play basketball week after week (especially Eurohoops which is less than spectacular compared to the NBA) to make a paycheck?  That’s amazing.

GETTIN’ PAID BABY… GETTIN’ PAID
Which brings up the sensitive topic of ‘getting paid’.  I know a lot of ballers will go to Europe to make a living.  My favorite UCLA player of all time, Ed O’Bannon, played in Europe for a while and made a million or so bouncing around Europe before retiring to Las Vegas.  (DEAR ED – I know it was a long time ago, but you ever want to get back into hoops & if you ever read this, please, please, please come back to UCLA.  You mean so much to us that remember 1995.  Contact the frickin’ athletic department and come home… you’re a GOD here in Los Angeles.  Everyone knows your story already.  I’m sure the administration would love your involvement and we love seeing you at the games.  You’re more of a symbol of UCLA greatness to my generation than Bill, Kareem, Reggie, Kevin, Baron, or anyone else I can think of.)

Anwyay, Drew said that Europe paid pretty well, and based on what I’ve read, players could make $100k-$300k annually.  But one thing he said surprised me because I hadn’t heard of it before:

“The pay’s pretty good… if you manage to get paid, that is.”

I asked him what he meant and he said that sometimes, getting paid for your play was random.  Some teams would just “not pay you”.  WTF?  Yeah, I guess in Europe, teams might decide not to pay you for whatever reason and if they do, you really don’t have any recourse because hey – you’re not a citizen.  You’re a gun for hire and you have no backup or legal recourse.

Man.  Can you believe playing an entire season and then someone says, “Sorry.  No soup for you.”

This is something I don’t remember reading elsewhere and it’s something that’s really stuck with me for a while.  In America – if someone screws you over, you always have recourse through our legal system and yeah, it’s not perfect but at least we have that level of fairness.

A NICE GUY.  THANKS FOR THE MEMORIES, DREW.
We went on to eat our dinners and said our goodbyes.  We hadn’t talked much but I knew that I’d talked to not just a skilled player and his girl, but a genuinely nice guy.  While one might thing he may have been a little humbled by the European hoops experience, I got the impression that he really didn’t have to be humbled much:  He didn’t seem like the kind of guy that would have a chip on his shoulder and was probably a nice enough guy before coming to play in Europe.

I hope he landed well.  Thanks, Drew, for the memory.

This entry was posted on Saturday, July 4th, 2009 at 3:18 pm and is filed under Uncategorized. You can follow any responses to this entry through the RSS 2.0 feed. You can leave a response, or trackback from your own site.