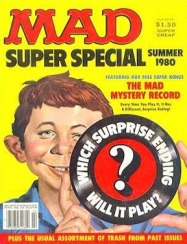 When I was a kid, I like my friends loved to read Mad Magazine.  I picked up a $1.50 mega-issue one day back in 1980 and to my delight there was an actual plastic record in it.  It was called a “flexi-disc” and was basically a thin piece of square black plastic that bent & warped very easily but could be placed on a 33rpm turntable and played like any other record.

1979’S MAD “MYSTERY” RECORD
What made this record special however was that depending on where the needle was when the song was playing, you could end up with COMPLETELY DIFFERENT ENDINGS to the song.  Seriously!  The song could playback one of EIGHT different endings depending on how the needle of the turntable went, which was actually only somewhat random, meaning that there were often endings that rarely if ever got played.

Y’see the “randomness” of the playback was determined by the needle hitting a groove in the record that wasn’t really a groove.  It was basically sheer, ungrooved area of the disc that allowed the needle to float randomly for a brief second and land on one of 8 grooves “end grooves” after rotating through the sheer area of the record once.  This provided a unique level of randomness to which “end groove” would be played back however there was definitely a predisposition as to which would be played back, simply because some grooves were easier to hit than others.

2010:  THE INTERNET BRINGS BACK “SUPER SPECTACULAR DAY”
This all happened in the 6th grade for me.

For the past 30 years, I have had the song from this disc stuck in my head.  I’m not joking.  All throughout my life, I’ve had moments where this song has sprung up from my memory at the strangest of moments.  Usually during times of stress, boredom, work, or just plain “time-to-myself”.

But the difference is, today, I have the Internet at my fingertips.  So on a complete shot in the dark, I decided to BING the search term, “MAD SUPER SPECTACULAR DAY”. Lo and behold, there it was.  Back in 2006, someone published some photos of what that very magazine looked like along with a photo of what the flexi-disc looked like.  BTW:  If you look at the disc photo, you can see the back area in which the needle would play.  There is light “white” groove in the middle – that’s the sheer area that I was talking about that provided the random jump to one of 8 different endings.

ANNNNND… SOMEONE RECORDED THE MUSIC!
But to my surprise someone actually digitized all 8 tracks!  No one knows who it was that did it or where it was they got it from (I mean, who really saved that disc?  My disc, as I recall was in TERRIBLE shape, because I’d played it over and over and over again and the disc’s grooves had been overplayed after a while) but sure enough, there it was for download.

I’ve had some problems playing the MP3s back.  It seems like the same ending (#2) is played back for many of the recordings… that being said, 3 of them appear to be unique and that’s better than nothing.  However given the quality of the recordings, there’s very much a distinct possibility that the recordings came from someone at Mad itself.  If so, thank you so much Mad.  This is definitely a blast from the past for me.

This entry was posted on Monday, March 22nd, 2010 at 7:03 pm and is filed under Uncategorized. You can follow any responses to this entry through the RSS 2.0 feed. You can leave a response, or trackback from your own site.